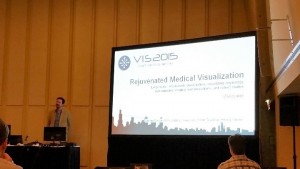 This year IEEE VIS (the conference formerly known as VisWeek) 2015 takes place in Chicago, also known as the “Windy City”. On the first day, I attended a very interesting tutorial about medical visualization entitled “Rejuvenated Medical Visualization”. This tutorial was opened by Steffen Oeltze-Jafra, the organizer of this event. He welcomed the audience and introduced the other speakers in the tutorial: Anders Ynnerman, Stefan Bruckner and Helwig Hauser.

The first talk was given by Anders Ynnerman. He presented the topic of whole-body visualization. One example of this is virtual autopsy, where forensic experts scan a body to analyze possible causes of death. With the scanned data, experts can then easily explore the body digitally to look for evidence or pathologies. Anders also showed the framework, which was developed in his research group, and explained the possible interactions. He started with a dataset of a traffic accident victim. He explored the data and revealed broken bones in the leg by simply changing the transfer function. After this, he unveiled the cause of death: a broken neck. The next dataset was of a woman with a cerebral aneurysm, which could be visualized by adjusting the transfer function and using cutting planes.

Another dataset was a scan of a patient with a heart pump. These examples were quite amazing as they demonstrate the possibilities and easy interaction options to explore this kind of data. The pre-last part of his talk was on a high resolution data set of a mummy. A mummy, lying inside a coffin, was scanned to gain insights into the insides of the body. This was quite interesting as it is not allowed to open the coffin and, therefore, it is the only way to explore the contents without damaging anything. While showing us this dataset, he revealed that the mummy had some very interesting jewelry inside; a special moment for the crowd. Based on some reconstruction work, they managed to physically print the jewelry, in this case featuring a depiction of a falcon. The last part of the talk was a small teaser of the work which was recently developed in his group, which will also be presented at VIS this year. This work presents simple interaction techniques to allow users to explore volumetric data without expert knowledge of transfer functions. 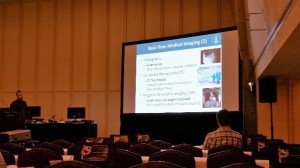 The next talk was given by Stefan Bruckner on “Visualization of Real-Time Imaging Data”. His talk was mainly structured around the acquisition of live in vivo image data of the human body. For this, he discussed mainly ultrasound data. He introduced common ultrasound modes, e.g., 2D, 3D, 4D ultrasound, Doppler ultrasound, contrast ultrasound, and elastography. One of the main challenges in this field is that real-time imaging means that no part of the visualization pipeline can be preprocessed, which causes problems such as a limited computational budget. Therefore, he talked about recent advances in filtering, classification, and rendering. The filtering part was about how to remove speckle and random noise, while preserving features. The idea is to filter along directions with lowest variances. They developed filtering approaches which have identical results compared to other approaches, but results in higher frame-rates. The classification part was about the process of mapping interesting parts to certain properties, e.g., colors. He also introduced examples where different properties of the data can be combined in order to gain reasonable visualization results. Here, some predicates, based on the data, can be  combined in a Boolean-wise fashion to interactively achieve the desired result. Afterwards, he spoke about rendering. Here, some concepts of light propagation were explained: how the human skin is layered and how this affects light transport. This can be used to gain a more realistic volume rendering. Finally, he explained an approach to produce a nice-looking result and how this can then even be used to generate realistic soft shadows, which enhances the perception of depth and spatial impression. Overall, these approaches have some impressive potential benefits in diagnosis. For instance, the medical expert can analyse or better perceive pathologies in the data. 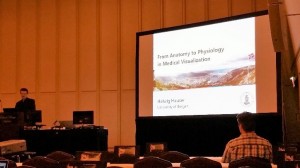 The next talk was given by Helwig Hauser, entitled “From Anatomy to Physiology in Medical Visualization”. He gave a nice and comprehensive overview of different image modalities, how to acquire various kinds of data and what functional imaging modalities are available, e.g., for the brain data fMRI, SPECT, etc. are needed. Afterwards, he presented several examples, for instance the hemodynamics in cerebral aneurysms. He mentioned the acquisition pipeline from anatomical imaging to geometrical vessel reconstruction and how to simulate the blood flow. Secondly, he gave several examples of vessel visualization with interior blood flow. Furthermore, he talked about quantitative perfusion analysis and mentioned some work on that topic. A final example was on functional brain studies. At the end, he summarized the challenges when it comes to analysis and visualization of these different types of data. 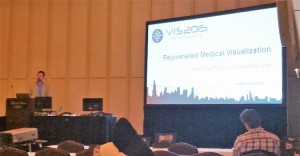 The last talk in this session was given by Steffen Oeltze-Jafra with the topic “From Single-Patient to Cohort Study Data”. First, he motivated this topic by giving examples of cohort studies, where a lot of data of thousands of subjects need to be analyzed. He explained the requirements in order to analyze these data and stated goals for epidemiologic research. Based on this, he also mentioned examples of campaigns, e.g., vaccination programs or no-smoking driving, which are based on the results of cohort studies. Next, he presented several examples that show how to tackle the goals of cohort studies. Some works of visual analytics approaches were mentioned and also some talks of the VIS conference were advertised. Another part of his talk was about image-centric cohort analysis. The problem is that the image data is too complex to fit in into the analysis pipeline. He explained the problem for spine image data. There, segmentation and registration are needed to acquire quantitative data, e.g., shape, weight, curvature of the bending of the spine etc. These data can then be used for further analysis, based on the image data. At the end, he concluded his talk by giving some final remarks on clustering, parameter settings sensitivity influences and even some remarks on hypothesis generation. 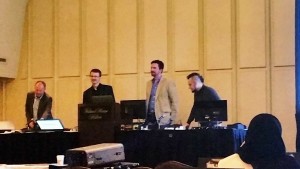 At the end, the tutorial was closed with an open discussion, where all the speakers where asked different questions on medical visualization. In summary, the tutorial was a great initiative to present recent approaches and the state-of-the-art in medical visualization. We hope to see more tutorials like this in the future, as this was quite interesting for a broad audience working in this field. We would like to thank Steffen for organizing this event and the speakers for their interesting talks!