In the spirit of better late than never, the Eurographics Workshop on Visual Computing for Biology and Medicine (VCBM) 2014 conference report, summarizing some personal highlights. At VCBM 2014, we tweeted a picture for every talk and then some, which was arguably a bit much, but still a lot of fun. The VCBM organization also posted a great recap using Storify at their website. Given the theme of the conference, almost every talk is relevant to our medical visualization interests, but I would like to briefly summarize only a couple of them here. The benefit of delaying so long in writing this is that there are a lot of videos online by now. I will try to let the videos speak a 1000 words where available instead of getting too verbose. Onwards to the highlights!

The venue was really amazing, VCBM was held in the Universitätscampus
Altes AKH, but not just in any old lecture hall, it was the former anatomical theatre of the AKH and still has the original marble slab that was used as a dissection table: 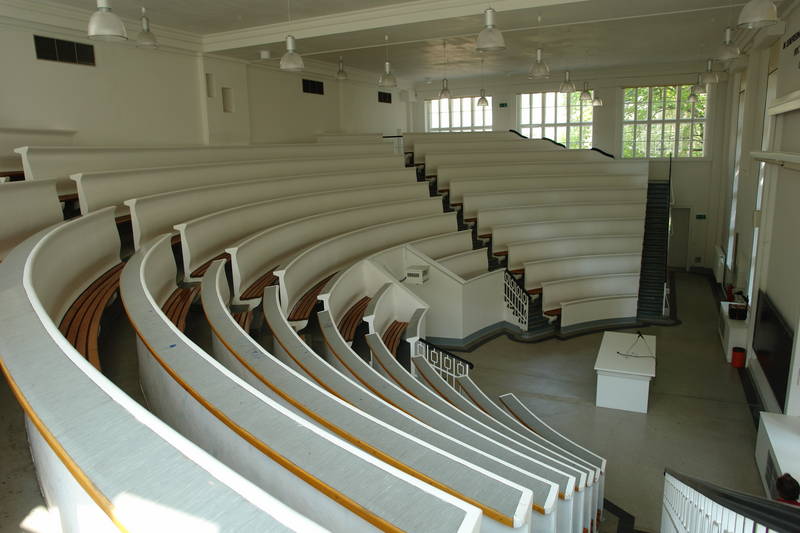 Hörsaal D at the AKH

A day before the start of VCBM itself, the VCBM fachgruppe (working group) had a meeting with six interesting talks. This was followed by a social event, a guided tour of the Narrenturm. Built in 1874 to treat mental patients, it now serves as a museum for the Pathologic-Anatomical Collection. The Narrenturm features a huge collection of moulages. These are wax models of diseases made based on real patients and used in medical education, which is cool and slightly creepy at the same time. This tour was followed up by a delicious dinner at Unibräu for those who didn’t lose their appetite after what they had seen during the tour.

On Thursday, VCBM itself kicked off with an opening by Katja Bühler. After this we enjoyed a keynote by Anna Vilanova on the future of medical visualization. Anna presented medical visualization as a field that is between fields: computer graphics and medical imaging. She talked us through the past, present and future of medvis and  going from facilitating analysis of the known to unraveling the unknown using visualization. A memorable quote from her talk:

“If the brain were so simple that we could understand it, we would be so simple we couldn’t” – Lyall Watson

In the evening we hiked up through the vineyards of Vienna to the main social event: dinner at the Waldgrill Cobenzl. The view on the vineyards and Vienna itself was really stunning. We enjoyed a delicious buffet dinner accompanied by Sturm. Sturm is grape juice that has just started fermenting and is only available for a limited time every year, so we were lucky VCBM was held in Vienna exactly during Sturm time. After dinner the winners of the Karl-Heinz Höhne Award for Medical Visualization were announced:

I would love to tell you who the winner’s were, but the official announcement has not been made yet ;), so I don’t dare… Congratulations to the award winnners nonetheless, you know who you are ^^.

On the second and last day of VCBM there were sessions on Volume Visualization, Image Registration and Data Reconstruction for Medical Interventions,  Visual Explanations and Display Techniques as a keynote by Nigel John entitled ‘Visual Computing in Healthcare – from the Research Lab into the Hospital”. In the keynote he presented several case studies and discussed some of the challenges
involved in deploying visual computing solutions in a hospital setting.

VCBM wrapped up with the awards ceremony. The best paper award went to:

The honorable mentions can be found here. Our congratlations to the authors! Ivan Viola closed the conference and announced the location for next year (this year by now ^^): VCBM 2015 will be held in Bangor (UK) and will from now on be an annual workshop instead of bi-annual (once every two years, not the twice every year-type). To conclude this summary, I’d really like to thank the organizers of this excellent workshop. Interesting talks, a beautiful location, good food, great people once again!

We’re currently at VCBM in Vienna. For live updates, check out our Twitter coverage and be sure to check back for a full conference report in the near future!

The “Call for Papers and Posters” for VCBM (AKA Eurographics Workshop on Visual Computing for Biology and Medicine) 2014 has been released! VCBM is an excellent venue for medical visualization work and this year it will be held in Vienna, Austria.

The deadline for full paper submission is June 19 and the posters need to be submitted by August 7. Don’t miss this opportunity to present your work at this excellent location and please take a look at this website for more details. In other news: did you know our website also features a conference calendar that you can add to your personal calendar? 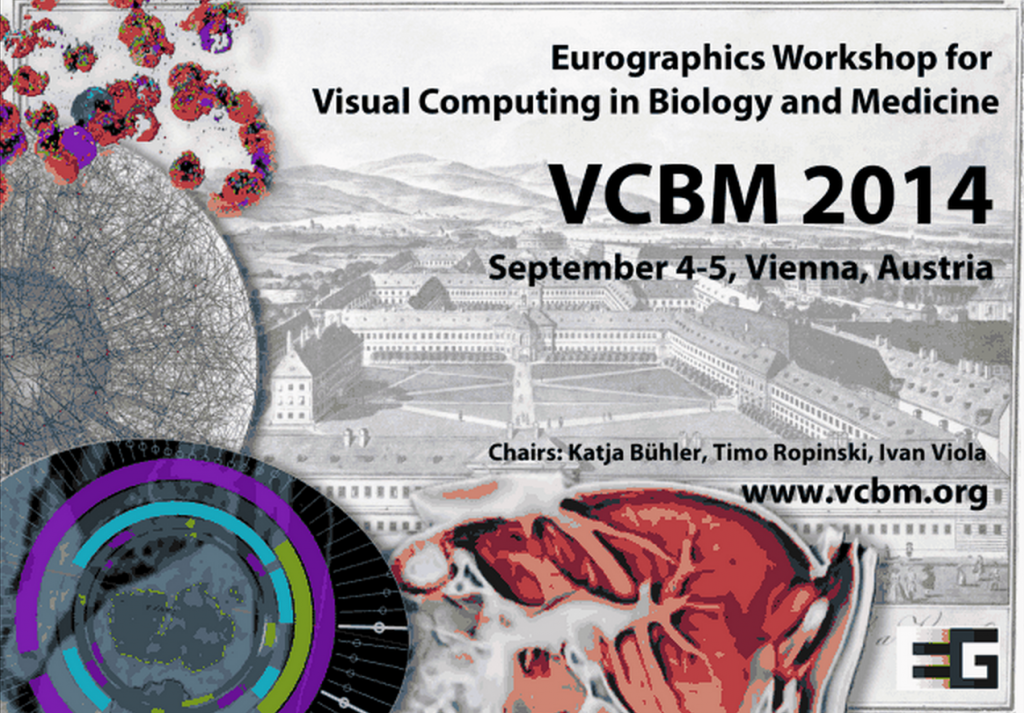 Start submitting those papers and posters for VCBM 2014!

The second position mentioned in this post is still available! To reiterate, they are looking for an Early Stage Researcher in the EU Initial Training Network (ITN) Software for the use of Multi-Modality Images in External Radiotherapy (SUMMER).

They are looking for a motivated young scientist that would love to use medical visualization to aid in the development of cutting edge solutions for radiotherapy planning. The starting date is as soon as possible, but before January 1, 2013. If you are interested in this position, please check this page for more details or contact Katja Bühler (buehler@vrvis.at) via e-mail. If you’re currently attending MICCAI 2012, you could also arrange to meet her there via e-mail.

Katja Bühler’s group at VRVis in Vienna currently has two medical visualisation Ph.D. vacancies. They are looking for two highly motivated young scientists preferably from European Countries interested in medical visualization and in the development of cutting edge solutions for radiotherapy planning.

More details and the description for these jobs can be found here
The lucky person that gets the first position can start right away and the second position will be available from August onwards.