Are you attending EuroVis 2016 in Groningen (the Netherlands) this year or even just want to know what’s up in terms of medvis action in this edition? I’ve got you covered with a preview of upcoming medical visualization-related that will be presented this year: END_OF_DOCUMENT_TOKEN_TO_BE_REPLACED

(We are grateful and overjoyed that Renata Raidou, of the TU Eindhoven University (the Netherlands) could write this short report on the medical visualization-related papers and other highlights at EuroVis 2013 for us.)

The official opening of the main conference included a keynote presentation by Peter F. Stadler on “Bio-informatics of non-coding RNA”, followed by a fast forward to all conference presentations, where everyone could advertise their work. The main conference included 49 full papers and 18 short papers, but I will focus on the three talks from the Medical Visualization part, plus a “bonus” talk from the “Volumes” category, also related to medical applications.
The first talk was given by Gabriel Mistelbauer from Vienna University of Technology on “Vessel Visualization using Curvicircular Feature Aggregation”. He described Curvicircular Feature Aggregation (CFA), a new technique for the visualization of blood vessels, which aggregates the images acquired around the centerline using conventional Curved Planar Reformation (CPR) into a single static image. In this way, the rotation of these images is eliminated and vessels can be investigated by inspecting only one image.

The second talk was given by Stefan Diepenbrock from the Visualization and Computer Graphics Research Group, University of Münster on “Comparative Visualization of Tracer Uptake in In Vivo Small Animal PET/CT Imaging of the Carotid Arteries”. He described a visualization application which enables the medical expert to explore and analyze in-vivo PET activity around vessels, through a projection technique that renders data around the vessels in a single image. In this way, the user can quickly check for activity maxima, intensity and spread. 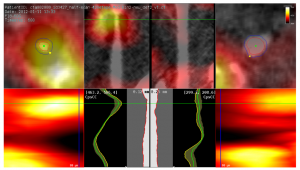 The third talk was given by Mathias Neugebauer from the Visualization Group of Magdeburg University on “AmniVis – A System for Qualitative Exploration of Near-Wall Hemodynamics in Cerebral Aneurysms”. He described an approach for the selection of surface regions of interest and for 2D overview of flow patterns represented by streamlines at these regions. The AmniVis supports binary classification of patterns and temporal exploration as well as methods for selection, highlighting and automatic 3D navigation to particular patterns. 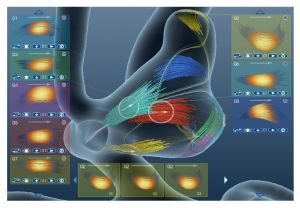 The last talk was given by Alexey Karimov from Vienna University of Technology on “ViviSection: Skeleton-based Volume Editing”. He described a novel approach for the editing of segmentation results that exploits structural features of the segmented object for correction and verification. In cases of severe pathologies, this new approach can increase the segmentation quality.

The conference was concluded on Friday 21 June by a captivating capstone by Hans Christian Hege on “Visualization in the Neuroscience Era: The Road Ahead” with a promising observation that in the coming years neuroscience and visualization will move towards each other with great and mutual benefit.

I really enjoyed attending this conference. It was my first time at EuroVis and I had the opportunity to meet a lot of amazing people and listen to a very interesting and inspiring talks. Next year, EuroVis2014 will be held in Swansea, South Wales, UK from June the 9th until June the 13th, so put these dates on your agenda!

First of all, happy new year from all of us at medvis.org! May 2013 bring you many job opportunities, research successes and/or good medical visualizations. I’d like to start the new year by looking back at last year briefly. I’ve taken a look at some of our blog statistics and will provide a short summary for those interested below:

Inspired by the world-famous VRVis conference calendar at http://confcal.vrvis.at/, I’ve added and maintaining our very own medvis.org medical visualization conference calendar. It features a full calendar view here and some imminent dates appear in the sidebar of this website to the right. The goal of this is to get a quick overview of upcoming submission deadlines, notification dates and conference dates for venues that are known to feature medical visualization research. The full calendar view also allows you to import one or more of the the submission deadline, notification and conference calendars to your own calendar.

It’s still a work in progress for now, so please contact me or leave a comment here if you have an update or addition to suggest.